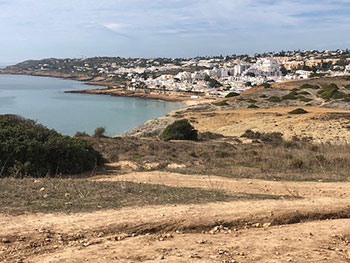 In spring the entire region is carpeted with white almond blossom.

The Algarve has something to offer everyone, tempting golf courses on which international tournaments are played, superb tennis and riding, and every watersport you can think of. There's an excellent choice of holiday apartments and villas, and hotels which also provide first-rate business and conference facilities. Walk through the busy local markets to choose from traditionally - made handicrafts such as matgrass baskets and rugs, beautiful hand-painted pottery and tiles, beaten copperware and intricate bobbin-lace. At night visit one of the many glittering casinos or clubs, or simply sit outside beneath the stars and sample some freshly-caught seafood.

There is much, much more to the Algarve than sun and sea. You can discover the remains of Roman towns, admire cool tiled churches and explore narrow winding side streets. Faro, international gateway to the region, offers lively cafes, smart shops, cobblestoned streets and grand houses with wrought-iron balconies. In the Cidade Velha - Old Town - you can browse around the 13th Century Cathedral and Bishop's Palace. 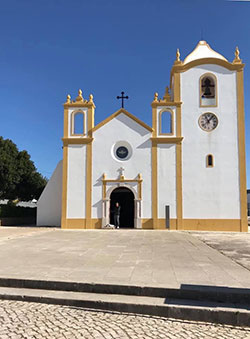 Moving west, the area around Almancil is best known for its prestigious holiday resorts. The tiny Sao Lourenco Church in the village, with its spectacular Baroque tiled ceiling, is thought to be one of the finest in Portugal. At the popular resort of Albufeira you can still see fishermen sitting on the beach beside their colourful boats mending nets. Inland lies Lagoa - famous for its wines, Silves - with its red sandstone castle and battlements standing proudly against a background of mountains, and Caldas de Monchique - a quaint Roman spa town. Lagos, on the coast, was one of the earliest settlements where Prince Henry the Navigator built his ships for the voyages of discovery. 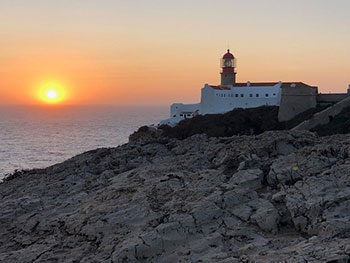 Further west lies the dramatic windswept promontory of Sagres - known for its fort, now an emblematic and cultural place, and for being the departure point of Portuguese navigators - and of Cabo de Sao Vicente, once thought, as it stood on the very edge of the world, to be a meeting place of the gods.

To the east of Faro stretches the Ria Formosa, a nature reserve with a peaceful bird sanctuary. The beaches along this part of the coast are flatter, wider and more deserted. Olhao is a 17th Century town built in Moorish style and known for its lively indoor fish market. Further east is one of the Algarve's most elegant towns: Tavira. With its pastel-coloured houses reflected in the gliding river, minature domes, ornate belltowers, low bridges and twisting streets, Tavira has a charming, almost oriental flavour. For a wealth of sports, night-life, beautiful scenery and glorious sunshine throughout the year, the Algarve cannot be beaten.